David Hostetler was the creator of a series of original and captivating works in wood and bronze that honor and celebrate the female form. Inspired by goddesses and celebrated women of historical significance, Hostetler based his entire life’s work on capturing the spirit, romance and earthiness of “the feminine” in exotic woods and in bronze. Whether revealing the sensuousness of the female figure or rendering visible the gift of feminine intuition, Hostetler’s works are moving, intriguing and a pleasure to touch and to see.

David Hostetler has been a celebrated American wood carver and bronze sculptor for over 61 years. His works appear in more than 25 museums and galleries, including the Museum of Fine Arts in Boston, Grounds for Sculpture in Hamilton NJ and the Butler Institute of American Art in Youngstown, Ohio. His pieces grace numerous public collections from Nantucket to New Mexico to the Netherlands.

Hostetler’s most visible installation was commissioned by Donald Trump, Lizanne Galbreath and Philip Johnson as a memorial to Ohio real estate developer and philanthropist Dan Galbreath, who was a partner in Trump International Hotel and Tower in New York City. Galbreath was a friend to Hostetler and a collector of his sculptures. The 13 foot outdoor sculpture, “The Duo,” is installed at Columbus Circle overlooking Broadway. A rough textured bronze, “The Duo” depicts two slender figures touching at the arms and seemingly grown from trees. The work was originally conceived as a tribute by the artist to his wife.

Hostetler earned wide acclaim for his unique treatment of the feminine form, his “women.” Most of his pieces begin as wood carvings, with bronze versions cast directly from the wood. In the ’60s, he gained national prominence with his American Woman Series – graceful, flowing wood sculptures. He initiated the series using indigenous hardwoods (elm, white oak, walnut, maple), then progressed from folk images to stylized symbols in exotic woods (purpleheart, ziricote and pink ivory). Celebrated photographer Yousuf Karsh created a unique portrait of Hostetler surrounded by his “women.” His artwork has been featured in films, on television and in newspapers and magazines.

Born in Ohio in 1926, Hostetler had a close relationship with his Amish grandfather, an influence which has stayed with him throughout his career. He was raised in a small Ohio town and went on to receive his Bachelor of Arts in Education from Indiana University. He obtained a Master’s of Fine Arts from Ohio University.He taught for thirty-eight years as a much appreciated professor and mentor, where he was named Professor Emeritus. Hostetler’s career has included guest teaching and lecturing throughout the United States and Mexico. His students include a number of accomplished artists such as Jim Dine and others.

Although Hostetler was renowned as a sculptor, his experience is indeed diverse. He trained as an engineer, worked as a farmer and a salesman, owned his own commercial pottery factory and created an art commune. His long time appreciation of religions inspired his study of Judaism, his constant pursuit of intellectual growth and development of new skills resulted in him learning to spin wool, create stained glass and build furniture. He continued to delve into women’s history, shamanism, the history of jazz music and musicians, American farm and craft tools (as well as collect them), folk art and American history and culture of the land. He had a deep love of music and played drums in his own jazz band in Nantucket (MA) and Ohio. Summers were spent in Nantucket, where Susan his wife still runs their gallery, and winters in Athens, Ohio, the time for art making and jazz performing. 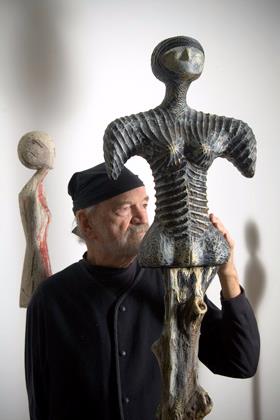 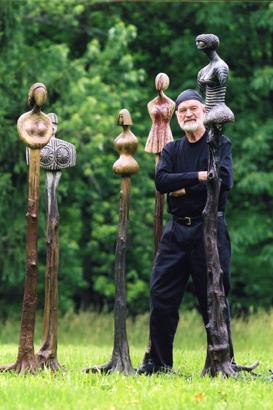